For people from the outside public transport in Nicaragua can be confusing. On the one hand it is very widespread and you can get nearly everywhere, but on the other hand getting to know when buses leave from where can be difficult. In the sixth-largest town of Nicaragua Estelí there are five different urban routes with buses taking you to different places in the town. If you know when a bus leaves from where, taking you to somewhere else, everything is fine and transport is cheap and quick. But if you don’t have this information, taking buses can be frustrating there. Fortunately, someone mapped all bus routes of the city in OpenStreetMap allowing you to at least look at the map where bus stops are and to where buses leave.

For some years there are different projects around OpenStreetMap that try to make public transport easier. One of these projects is Transportr which is a fully free and open source Android application for getting routing information, created by Torsten Grote. Torsten also created a python program called osm2gtfs which allowed him to bring the public transport of the town he lives in to Transportr by parsing the route and stop information from OpenStreetMap. Unfortunately the program was very specific to the requirements of this town, resulting in being very hard to use in other regions.

Some two years ago, more than 100 volunteers mapped all public transport routes and stops of Nicaragua’s capital Managua, making Managua the first region of Central America with a public transportation map. Exactly the same volunteers later worked together with volunteers from Costa Rica and other places of the world on Torsten’s program in order to make it usable more easily for other parts of the world. They made quite good progress on this part, but when I arrived in Estelí there were still some things to do.

I joined together with the volunteer of Estelí who mapped all the public transport data of the town in order to package all that information as GTFS, a common format for public transportation schedules and associated geographic information. We had success generating GTFS archives for both Managua and Estelí and therefore were able to build with help of other tool the first trip planning application in Nicaragua that serves the capital Managua and the city of Estelí and can be easily extended to serve other regions like national bus routes. 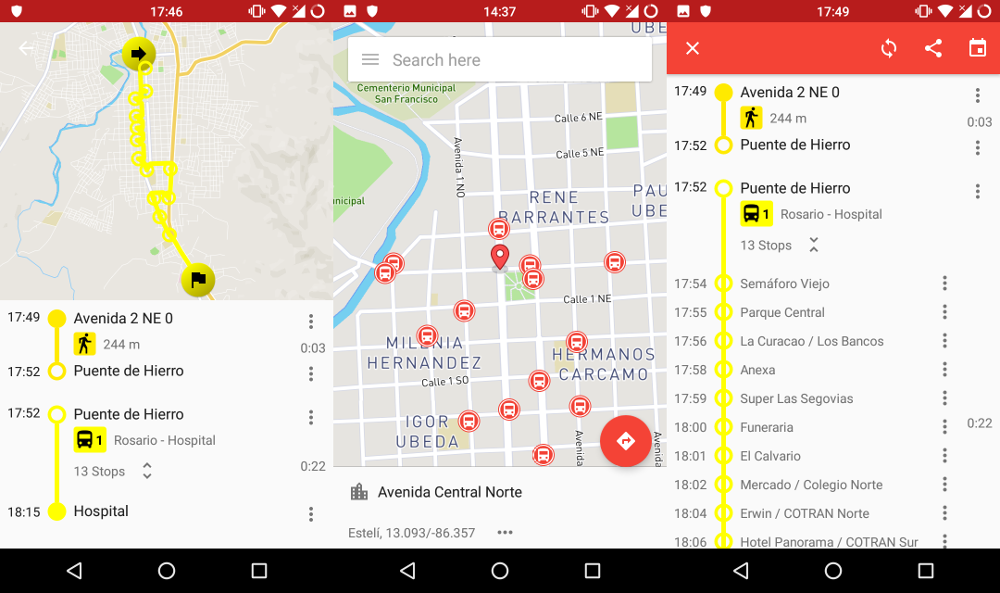 You can find additional information on our project here. The text and images in this blog post are published under a CC0 1.0 Universal (CC0 1.0) Public Domain Dedication.